Before I start, be warned that this will be something of an odd entry. I’m aware, as I type this, that there are only three people in my normal social group to whom this will make any sense (you know who you are!). This is, therefore, not a mass blog posting in the traditional sense, but something of an aide-mémoire for me, as in a year, I’ll need a jog.

Today, the 6th of February 2011, I attended my first rally. Again, that’ll mean nothing to the majority, and around 12 years back when I heard my colleagues Don and Glen asking if they’d be going “down the rally on Sunday”, it meant nothing to me. Twelve years on, I broke my Rally virginity with a trip to The Paddocks on Canvey Island.

So, what’s a rally? Well, it reflects my new hobby – playing around with radio transmitters and bits of wire. I’m now a licensed radio amateur, and the various ham radio rallies held around the country are opportunities for other hams to meet up, and buy stuff. And boy, is there lots to buy.

I’ve been to my fair collection of trade shows, collectors fayres, gadget shows and exhibitions in my time, but this was an eye opener – where else can you buy a working radio transmitters for less than a tenner? More connectors than a Maplin stocktake, some very odd antennae, large boxes of random unlabelled things (that clearly mean something to those eagerly searching), stuff that appeared to pre-date Marconi, and more importantly, lots of helpful folk hoping to sell their wares and enthusiasts passing on knowledge and advice. 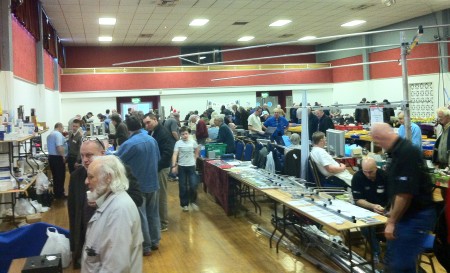 First off, a few thanks:

I came home with a bag of stuff – including a bunch of connectors (about 5 times cheaper than at the local Maplin), a podcasting book that I’d been searching for, some sweet wrappers, and a some rather odd wire that I’ve spend the evening making into a rather clever aerial.

Stuff bought at the Canvey Rally

The antenna in question was introduced to me by the aforementioned Jim 2E0RMI, and is known as a Slim Jim (not after Jim 2E0RMI, although coincidentally, Jim is quite slim). Who’d have thought I’d be making my own aerials? Yup, that’s how I spent my Sunday afternoon.

My Slim Jim is now ready and waiting for testing (it’s a portable aerial used for VHF comms – coils up nicely and does clever things on the 2 meter band). I can almost hear people glazing over as I type. Apparently, you can also make a decent portable dipole aerial out of two stair-crawling Slinky toys. That’s next Sunday sorted then…

Things to note for next year Pete:

It’s great to see that amateur radio is very much alive, and to experience my first real taste of the rally community… a club I should have bought into a long time ago. All in all, a good and interesting day. I’ll be back (as they say).

petes February 6, 2011 amateur radio, canvey island, hobbies Out and About No Comments »
Feeling positive about 2011
A Quick Test Post