Carry Your Towel With Pride

If you’re reading this, there’s a good chance that you know me. And if you know me well, you’ll be aware that my passions include Tea Dunking and the works of one wholly remarkable author.

No, today isn’t National Tea Dunking Day, in fact it’s Towel Day, a day set up by fans of the Hitchhikers Guide To The Galaxy to make the passing of Douglas Adams in 2001.

What is Towel Day?

It’s a day that all fans carry a towel, in acknowledgment that a towel is the most staggeringly useful thing that anyone can carry. I’m sitting here typing, sitting on my towel as a mark of respect, and I’m hoping that many of my like-minded chums out there, even if they’re not carrying a towel, are at least thinking towel-ly thoughts with the occasional Hitchhikers quote drifting through their minds.

Towel Day has prompted me to revisit the original radio series of HitchHikers Guide to the Galaxy, even though a) I should be working, b) I should be revising, and c) I know the script off by heart, but it will be getting a listen at some point today. If you’re unfamiliar with the whole Hitchhikers thing – forget the movie, and enjoy the radio series, which you can download for little more than three Earth pounds – H2H2 at Audible.

Even the cat is getting into the spirit, having a nap on a handy towel. 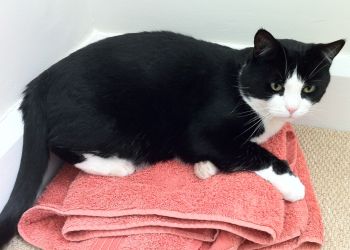 Share and Enjoy Towel Day, and check out the various Towel Day activities around the world at towelday.org

It’s on day’s like this, I really wish I’d listened to what my mum said…

(By the way, you can buy the T-Shirt from ThinkGeeks.)