My Take on Ham Radio Training 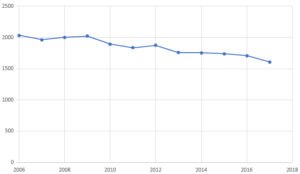 In August 2018, the RSGB announced that a new, and tougher, entrance exam would be rolled out. According to the RSGB’s own stats, last year saw a significant drop in the number of newcomers, and in 2017, the newcomer count has hit a 12-year low.

The new exam will be harder to pass, and more worryingly, harder to teach – and as all trainers are volunteers, some may decide this is a good time to stop, whilst others will rise to the challenge. To cover the extra content, courses will have to become longer (and may be more expensive), and the new practical exercises introduced will likely require volunteers and training clubs to buy new equipment.

To me,  it’s not immediately obvious how, at a time of decline, rolling out an exam that’s harder to pass and harder to teach, will inspire more training and more candidates. These things are vital to growing the hobby and ensuring there are more people coming into the hobby, than ‘falling off’ at the other end.

For those not familiar with the change, one of the changes being discussed at length at the moment, is the introduction of resistors in series and parallel. For those with an interest in electronics or kit-building, this is a trivial piece of electronics. But for those looking to get into a radio hobby, it could be seen as a hurdle. Admittedly one that some will jump with ease, but others may fail to see why, at entry level, this is relevant for a communication hobby.

Resistors used to sit nicely at the Intermediate level. Assuming you’ve done your Foundation, you’re introduced to construction and start with some basic circuits, leading to a kit. Most amateurs don’t progress onto construction, but they’ve got their licence, had an introduction, and have been informed of the important safety stuff, so the grounding is there for those who want to go down that route.

From 2019, newcomers can’t sit their exam until they’re competent with resistors and Ohm’s law, and can use a multimeter to measure current in an LED, and the changes when an additional resistor is added in parallel with the first. Nothing to do with radio, ridiculously basic if you’re into electronics, too basic to inspire candidates to get into the exciting world of making LEDs get brighter, and a bunch of hassle for under-resourced clubs.

If I wanted to become a detectorist (I think I have that right), I’d expect a club to teach me how a detector works, techniques for good detecting, the legal side of where I can detect, how to be safe, and some basic theory on types of metals, etc.

For amateur radio, I’d expect to be taught how a radio works, techniques for good operating, the legal side of where I can transmit, safety stuff, and some basic theory on bands, propagation, kit, antennas, SWR, etc.

I would not expect to be told that I couldn’t use a metal detector unless I could calculate the current across two tiny components and a light (and nothing to do with metal detecting). Nor would I expect to have to draw diagrams of the internal workings of the detector, recite two electronics formulae, learn how to use a current meter, or recall the colours painted on some of the internal components on a pre-surface mount version of a detector.

Sure, some people may want to build their own metal detectors, or understand the scientific theory behind how they work to degree-level – and that’s great. For them, there should be progressive courses – when that person’s had some time trying the hobby, and wants to learn more.

What would I change?

I’ve been asked to outline what I’d do to change things. Well, it’s too late. Quietly in the background, the RSGB has consulted Ofcom, made the changes and printed the training books, before any of us trainers got to see the changes. It’s a fait accompli, so discussing how I’d do it differently, is academic at this stage. Nonetheless, as I was asked – here are my thoughts, for the little that they’re worth.

With the right weighting, this could be delivered in the same duration as current Foundation.

Foundation, to me, should be a taster into the hobby. Sure, it needs to include what Ofcom mandates for radio amateurs to be able to transmit in-band (and the existing licence conditions module does that perfectly well already). Safety’s an issue, so needs to be there too. Then enough material to get you on-air properly, and pointed in the right direction. As we all know, the real learning starts when you’ve got your licence.

As for the practicals? Here’s what I’d do:

Between now (August 2018) and when the exams start, there will be a lot of activity. Some complaints from trainers and clubs concerned about delivery, and the creation of new books and training material. Some trainers will need to be ‘re-trained’, and some effort will be needed by clubs for the new practicals. What will the impact be? My best guess:

In reality, it’ll be somewhere in the middle, and it the impact will likely be discussed after the exam has bedded in for at least a year. Watch this space until the first year’s data is published in 2021.

One Commentto My Take on Ham Radio Training