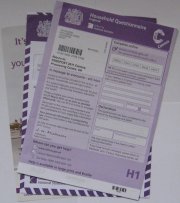 Sunday the 27th of March 2011 was the UK’s official 2011 census day. Each household in the UK is required, by law, to complete the census form and return it to the Office for National Statistics.

Data provided by residents of the UK goes to help shape the country’s future. It happens every 10 years, and each year, we get more and more questions. This year, the Government want to know what type of central heating system we have, how each of us get to work and what exams we’ve passed. The controversial, and optional, question, is religion.

In general, I’m in favour of the census, and believe it should be treated seriously – mainly for the family history element. For some years now, our family has been researching our family tree, and access to the 1841, 1851, 1861, 1871, 1881, 1891, 1901 and 1911 census has been invaluable in tracing ancestors and building up a picture of our extended family (I use the excellent Ancestry.co.uk for census access). In the hope that the 2011 census falls into the hands of my descendants, I’ve completed the form by hand (as opposed to the online submission that many would suspect I’d do), and I’ve been happy to tell the ONS that my central heating is gas-fired, to help keep future generations informed.

I’ve also, of course, told them that I’m a Jedi – 400,000 people in the UK declared themselves as Jedi in 2001, making Jedi the 4th largest religion. See: Jedi Census Phenomenon at Wikipedia 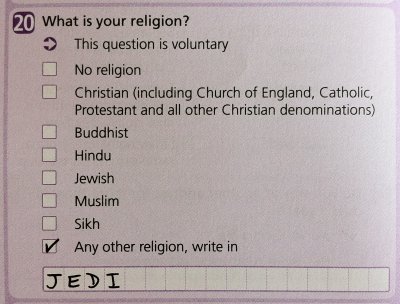 The phrase “May the force be with you” is especially true today, as I’m using a Star Wars Lego game as part of a review I’m writing re. the Nintendo 3DS.